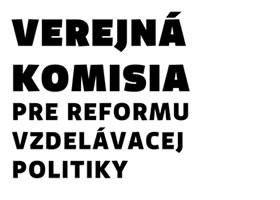 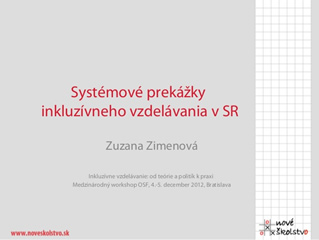 Looking in: an outside perspective of the Slovak education system

The first two weeks of my internship at Nadácia otvorenej spoločnosti- The Open Society foundation can only be described as a crash course on the current state of education and the work being done by non-governmental actors and the Slovak Government to improve the status quo. While NGOs have consistently achieved small successes, these are often overshadowed by the fundamental failing of the government: despite multiple directives, action plans and promises to improve the situation.

It is impressive to see so many committed NGOs working on such broad issues in Roma education. Given the government’s apathy to what is somewhat ominously called ‘the Roma problem’, this work is paramount in making positive change. However the scale these programs can currently work on is limited, and as such it is hard to imagine widespread change working in this manner without the support of the government funding or massive grants, both of which seem unlikely.

What is especially frustrating to me is governmental and societal apathy towards education. Disinterest is not limited to specific groups. To some extent one can make allowance for government inaction and society’s aversion to ‘the Roma problem,’ given that educational failure is intrinsically linked with other problems such as poverty: we can all agree this is an incredibly difficult problem to grapple with. There is an egocentric focus in education – by which I mean one is interested in one’s own success, or one’s children doing well. But there seems to be a lack of forward thinking and general disinterest in quality education at all levels, whether school age or tertiary. As such, the Slovak Republic is failing to align schooling with job needs and practical futures.

Failure in the level and class of education will limit children’s ability to meet the challenges of the future. I applaud the efforts of those projects aiming to create dialogue about education, such as Nove skolstvo “Chceme Vediet Viac” as well as their call for the public commission on educational reform. Awareness, dialogue and critical thinking are positive first steps in improvement.

What I find most concerning is the publics general apathy towards the values currently entrenched in Slovak education. The schoolyard is a microcosm for society in general. Given the lack of multicultural and inclusive education there is little wonder that Slovak society has rising problems with extremism and nationalistic sentiment. I feel there is a need to move away not only from a segregated mindset, but also to a non ego-centric focus. This would encourage the development of inclusive, vigilant and international citizens, to better serve Slovakia in the future. Currently, good education is moving away from the socially disadvantaged groups who need it most. This will result in a multiplication of the problem and huge economic pressure on the rest of the population, thus reinforcing the already negative stereotypes. It is a vicious cycle.

The systematic practice of racism, segregation and discrimination is unacceptable in 2014. Whether what is required is a change in mindset of society, and a widespread call for change or something else, I don’t have the answer. What I do know is that improvement in the educational system is vital for the future success of Slovakia.

Claire Smith is an intern at the Nadácia otvorenej spoločnosti - Open Society Foundation. She studied law in New Zealand, and plans to begin her masters in Human Rights this year.

Looking in: an outside perspective of the Slovak education system

While NGOs have consistently achieved small successes, these are often overshadowed by the fundamental failing of the government: despite multiple directives, action plans and promises to improve the situation.